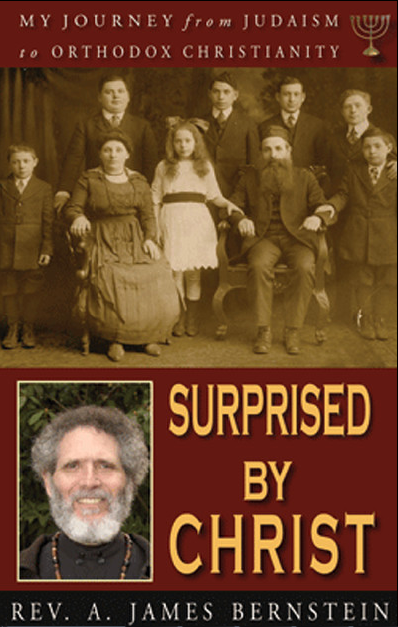 Surprised by Christ: My Journey from Judaism to Orthodox Christianity

By Fr. A. James Bernstein

The story of a man searching for truth and unable to rest until he finds it. Raised in Queens, New York, by formerly Orthodox Jewish parents whose faith had been undermined by the Holocaust, Arnold Bernstein went on his own personal quest for the God he instinctively felt was there. He was ready to accept God in whatever form He chose to reveal Himself--and that form turned out to be Christ. But Bernstein soon perceived discrepancies in the various forms of Protestant belief that surrounded him, and so his quest continued--this time for the true Church. With his Jewish heritage as a foundation, he studied and evaluated, and eventually came to the conclusion that the faith of his forefathers was fully honored and brought to completion only in the Orthodox Christian Church.

Surprised by Christ combines an engrossing memoir of one man's life in historic times and situations--from the Six-Day War to the Civil Rights Movement to the Jesus Movement in Berkeley--with a deeply felt examination of the distinctives of Orthodox theology that make the Orthodox Church the true home not only for Christian Jews, but for all who seek to know God as fully as He may be known.

"Surprised by Christ is an autobiography, an intellectual history, and a conversion story, and more than these, conveys a spiritual and theological vision in a message that touches people from many different backgrounds. That vision is of the Living God revealed in Jesus Christ, who is the fulfillment of the Old Covenant, the life of the Faithful, the hope of the despairing, and the motivation for those who strive to preach the Gospel in all its integrity." -- Hieromonk Jonah (Paffhausen), Abbot of St. John of San Francisco Monastery in Manton, California (from the foreword to the book)

"The story of Fr James' journey is fascinating. It reminds us again of the sovereignty of God, and his desire to reach every one of his beloved children, no matter where they are." --  Frederica Mathewes-Green, author of Real Choices and Facing East

"In life you meet a handful of people whose stories crash through the usual categories of human experience and form a new kind of stand-alone narrative. Enter: Fr. James Bernstein. Son of a Jewish rabbi, national chess champion, leader with Jews for Jesus in Berkeley, Orthodox Christian priest – whew! You will love and be greatly encouraged by his unusual story of life in Christ." -- Fr. Peter E. Gillquist, author of Becoming Orthodox

"A marvelous volume! It shows how in our time, just as two millennia ago, the question posed by Christ, 'Who do you say I am?'" (Matt 16:15), is resoundingly answered: 'The Messiah, the Son of the living God.' All conversions are miracles of God's grace. Fr. James Bernstein allows us to share in the special miracle of his conversion." -- H. Tristram Engelhardt, Jr., Ph.D., M.D., Professor, Rice University, Professor Emeritus, Baylor College of Medicine, and Senior Editor, Christian Bioethics

"Fr James Bernstein's roots are here in Jerusalem even as he ministers in the Pacific Northwest. Though separated by vast distance we are one and united in our desire to actualize an authentic Jewish Christian Orthodox Church in the Holy Land as in the beginning. His book compellingly presents why of all branches of Christianity, Orthodox Christianity has by far the greatest kinship to Judaism." -- Fr. Alexander Winogradsky, Greek Orthodox Patriarchate – Jerusalem (Head of the Hebrew-speaking community)

"In sharing his 'surprise' with us, Fr. James Bernstein shows that he is a Hebrew prophet in the definition of prophecy provided by that other 'Hebrew born of Hebrews' who knew the same 'surprise.' In sharing his story and convictions, Fr James 'speaks to people for their edification and encouragement and comfort.'  (1 Cor 14.3) The grace and spirit of His words match the grace and truth of their content. We thank God for this prophetic gift." -- Protopresbyter Thomas Hopko, Dean Emeritus, St. Vladimir's Orthodox Theological Seminary

About the author The Rev. A. James Bernstein was a teenage chess champion whose dramatic conversion experience at the age of 16 led him to Christianity. His spiritual journey has included a number of twists and turn: he was chapter president of Inter-Varsity Christian Fellowship at Queens College, helped found the Jews for Jesus ministry in San Francisco, was a staff member of the Christian World Liberation Front in Berkeley, served as a pastor of an Evangelical Orthodox Church near Silicon Valley, and later became an Eastern Orthodox convert and then priest. He lives with his wife Bonnie outside of Seattle, Washington, where he serves as pastor of St. Paul Antiochian Orthodox Church. Father James is the author of the booklets Orthodoxy: Jewish and Christian (Conciliar Press, 1990); Which Came First: The Church or the New Testament (CP, 1994); and Communion: A Family Affair (CP, 1999). He was also a contributor to the Orthodox Study Bible: New Testament and Psalms (Thomas Nelson, 1993).