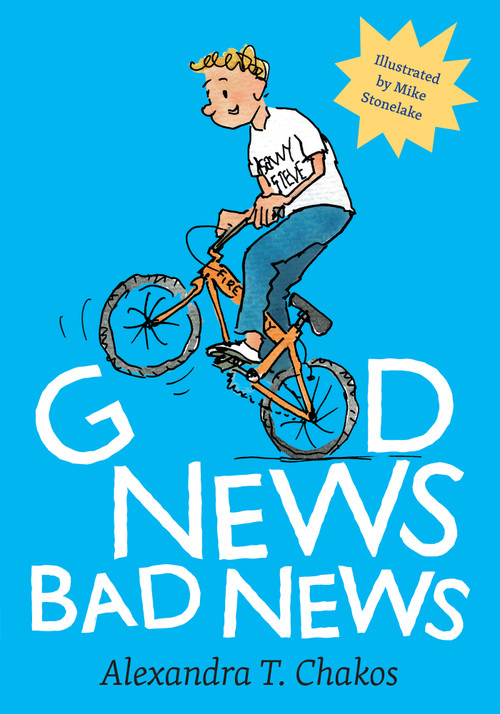 Eight-year-old Steven desperately wants to win the top prize in his school’s fundraising campaign - a shiny new BMX bike. The good news is that just selling lots of boxes of cheese and sausage will help him win. The bad news? He’s willing to break rules and bend the truth to make his dream come true. Meet Steven and his family - older brother, Paul, who is glad he doesn’t have to sell stuff; little sister, Sophia, who tries to keep the peace between her battling brothers; Dad, an Orthodox priest, busy with his own fundraising to build a new church; and Mom, just trying to keep up with all the activity. Enter into this charming world of a young clergy family - a place where God’s presence is revealed in unexpected ways.

About the Author: Presvytera Alexandra has spent the major portion of her life communicating with children. She is the mother of four and the grandmother of fourteen. She has worked for many years as a preschool teacher, a Sunday school teacher, and an organizer of summer camp and vacation church school programs, as well as working as a professional clown and storyteller. Using her knowledge of Greek, English, Spanish, Portuguese, and Swahili, she has entertained children with her stories in the many countries where she has lived and traveled. Good News, Bad News is a story based on real-life events that happened while she was raising her own beautiful children.

About the Illustrator: After completing a degree in fine art, Mike worked in graphic design, before moving into illustration. His background in both fine art and design offers his illustration work a versatility that is evident in the wide range of projects he has been involved with, including editorial, corporate, and children's. Mike has had a passion for comics since childhood, particularly alternative and Bande Dessiné; he writes and draws his own comics. He has visited many former Eastern Bloc countries, and in the 90s lived and worked in Russia; on his return to London, he helped run an art gallery that specialized in work from the former Soviet Union.