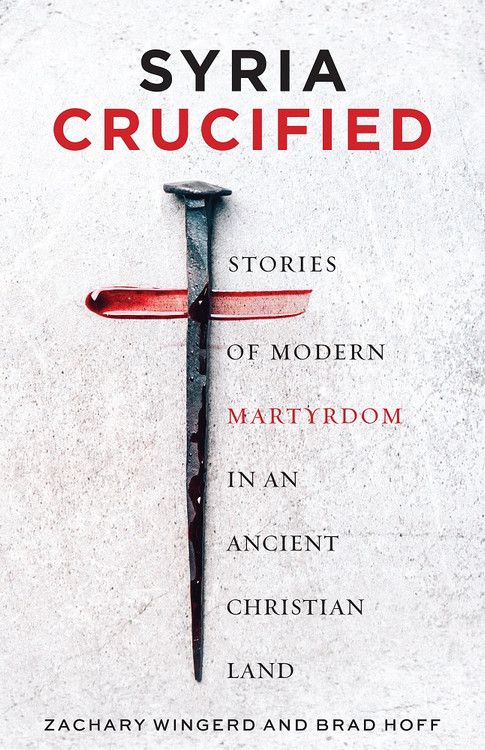 Stories of Modern Martyrdom in an Ancient Christian Land

by Zachary Wingerd and Brad Hoff

The tragic war in Syria along with the plight of the Christians there remains among the most misunderstood situations in the world today. Syria Crucified seeks to contribute to better understanding in the West by giving a voice to individual Syrian Christians living in exile from their homeland. These men and women have undergone horrific trauma and loss without losing their faith in God or the ability to forgive their persecutors. Their first-person accounts, framed by the authors' narration for historical, cultural, and geopolitical context, are both edifying and inspiring.

Zachary Wingerd, Ph.D., is a senior lecturer in history at Baylor University, where he teaches, among other courses, the history of the United States in Global Perspective. His first publication, Conversations of Modern World History: 50 Voices from 1400 to the Present, emphasizes the role and perspective of the individual within a broad historical context. He lives with his wife, Lindsey, and five children, Joshua, Jonathan, Juliana, Genevieve, and Joseph, in Waco, Texas, where they attend St. Andrew Orthodox Church.

Brad Hoff served as an active-duty Marine through the early 2000s, watching with alarm the consequences of U.S. action abroad. After leaving the military, he began wandering around the Middle East, eventually adopting Damascus as his second home. After a decade-long teaching career, he turned to independent journalism, last embarking on a reporting trip to Syria at the height of the war. His work has been cited in multiple international publications. He resides in Waco with his wife, Reem, and children Sophia, Emilia, and Justinian. They attend St. Andrew Orthodox Church.

"Syria Crucified is a deeply moving book, which is at the same time an extraordinarily valuable document for understanding an area that was long so vitally important to Christian history. Even if we read all the many works of analytical scholarship about religion and conflict in the contemporary Middle East, they are still no substitute for the firsthand accounts that we find in this really enlightening and often harrowing piece of oral history. Syria Crucified gives us the voices of the ordinary people themselves, in all their courage and hope and sadness. I cannot recommend this book too highly." -Philip Jenkins, Distinguished Professor of History, Institute for Studies of Religion, Baylor University

"This important work on the tragedy of the unjust war in Syria is vital for bringing the forgotten war in Syria to light. The accounts the authors have documented will provide historians of the future vital details of the real-life experiences of the Orthodox Christian families and others who suffered at the hands of radical terrorists supported by countries and groups from outside Syria. These examples are representative of the suffering of all the Syrian people in general and the Christians in particular." +JOSEPH, Archbishop of New York and Metropolitan of all North America, Antiochian Orthodox Christian Archdiocese of North America

"The overwhelming love and hospitality of the Syrian people, both Christian and Muslim, are not foreign to me. This book includes so many places and faces that I have known and experienced. Yet their dark and tragic days happened so far away. Until now. Syria Crucified brings us face to face with the suffering, the sacrifice, the martyrdom - yes, even the love and hospitality - of the Cross. By their faithful witness, may God grant us all good strength and Syria’s Resurrection." -Archpriest Joseph Huneycutt, Antiochian Archdiocese Department of Missions and Evangelism

"Syria Crucified introduces mostly unknown and oft-forgotten voices. I could not put it down once I started. The strength and endurance of Syria’s Christian minority is shared through first-hand accounts of the tragic events of the past decade. Hoff and Wingerd have written an invaluable text that ensures their voices will not be silenced." -Fr. Christopher Salamy, Pastor of St. George Antiochian Orthodox Church in Phoenix, Arizona, and author of The Way of the Warrior Saint

"Pre-war Syria offered the Christian community its version of religious freedom and tolerance. The war broke the secure bubble. Yet, how these individual Christians responded to their tragedy should touch the reader’s mind, heart, and conscience. Syria Crucified contributes both to the academic and popular literature, as well as to those who claim a religious faith." -George W. Gawrych, Professor Emeritus of Middle East History, Baylor University

"This is an excellent and unique book on Syrian Christians during the past ten years of war - unique because each chapter provides the testimony of a Syrian while including lots of church history spiced throughout." -Joshua Landis, Director of the Center for Middle East Studies, Associate Professor at the University of Oklahoma

"I hope this book will reach many readers and open many eyes as to the suffering that Christians in Syria endure. This untold tragic story is untold no more." -Frederica Mathewes-Green

LOOK INSIDE... Syria Crucified: Stories of Modern Martyrdom in an Ancient Christian Land